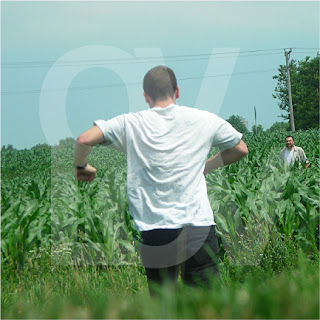 When I was introduced to Connecticut's fuzz pop concern, Ovlov a couple of summers ago it only took about 30 seconds into The Valley, the lead track of their terrific debut EP, WASGTC?, before I was hooked. A rare eureka moment that causes you to play the shit out a bands every recorded moment, tell your friends, and pseudo friends and really anyone who will listen of the existence of a band that must be heard. Earlier this month The Hartlett Brothers, Steve (guitar/vocals), Theo (drums), and Jon (bass), issued am, there hotly anticipated and completely satisfying debut full length via Exploding In Sound Records.

The LP kicks of with a combination of crashing guitar fuzz and sweet dual vocals courtesy of Steve Hartlett and Sadie Dupuis, that track is just one of four songs to feature vocals from the Speedy Ortiz fronter, the album also features three member of Grass Is Green, with GIG's Michael John Thomas III getting credited with the albums production. Throughout am the trio discharges an impressive collection of taught and distortion drenched pop song while making use of some 1990's indie touchstones such as Dinosaur Jr., and Blonde Redhead,  but as they exhibit on one of the albums standouts, Moth Rock Ovlov manage to create something unique and exciting yet instantly gratifying and familiar, a little like chatting with that old friend that introduced you to Silkworm in college. On tracks like Blue Baby and Where's My Dini? the trio display an penchant for delivering strong melodies and subtle hooks, albeit those ripe melodies and hooks are covered in multiple layers of dense fuzz, but that only lends to the albums varied and addictive landscape.

All and all, Ovlov manage to exceed expectations they set with WASGTC? and the Not The Same Without single, simply by displaying their strength for crafting material that is as precise as it is cathartic, not to mention an LP filled with 10 high caliber tracks all while burying the needles into the red.