Due to the fact that my job keeps me on the road most of the time it's nice just to stay put and hang out with the family.

On Saturday my sons had a birthday party to attend so I ended up taking care of a few things around the house and watching the baseball game. It sounds kind of boring but it was nice. When Mrs. Speakers got back from the party with the little ones we decided to order up some take-out and skip the mess and headache of cooking.

We took the boys to MOM on Sunday. For those not from the Boston area MOM stands for Motion Odessey Movie that a large furniture chain has been operation for many years. For some reason or another I never thought of checking out until that is I had children. The feature was a short Spongebob Movie. It's part ride and part 3-D movie. The boys went bonkers it was a blast.

That was quick, weekends are never long enough....back to work...urgh
Posted by Bryan Hamill - Executive Editor at 4:03:00 PM 0 comments

Everytime I turn on the TV I hear They Might Be Giants hocking Ice Coffee for Dunkin Donuts or acting as the house band for Playhouse Disney. I really enjoyed there childrens albums especially Here Come The ABC's and it's a favorite of my sons. I don't mind the tunes they supply to Playhouse Disney but come on with the whoreathon. It's like they can't say no. I like TMBG but I guess I wish they'd go back to the cult following and leave some advertising dollars to Kelly Clarkson.
Posted by Bryan Hamill - Executive Editor at 2:30:00 PM 0 comments

Two upcoming releases due in October to put in your calendars.
Pernice Brothers- Live a Little(Ashmont Records)
If the free download on the bands website is any indication of what we can expect from the forthcoming Live a Little Joe Pernice has raised the bar once again. It's always a pleasure to praise one of my boys from the irish riviera, that's Boston's south shore for the unfamiliar.
You can download the song and video in mulitple formats at the bands site.
Release Date: October

For more information and the free downloads check out www.pernicebrothers.com

Robert Pollard- Normal Happiness (Merge)
In a recent e-mail from Merge Records I see that they have Normal Happiness on the release calendar for October. I was lucky enough to hear a handful of these tracks during Bob's From a Compound Eye tour and count this as one of my most anticipated releases. With tracks like Supernatural Car Lover and Serious Bird Woman(You Turn Me On) Uncle Bob will not disapoint.
Release Date: October 10th

In other Bob related news the 33 1/3 book serious will release they're take on Bee Thousand in the fall as well.

Time Flies Around You

It seems like I was just rambling on about the 4th of July and here we are 14 days later. Where does the time go? I wish I knew. My job has been sucking the life out of me. So to say I'm gald to see another temporary end aproaching is putting it mildly.

My buddy March to Sea always says when in doubt go with a list so here you go.

10 Things that make it all bearable

1. Nicole (Mrs Evil Speakers) and the little ones on the beach and smiles all around.
We have an off road beach that makes the beach with 2 little boys under 5 a lot of fun.
2. The excellence of The Eraser from Thom Yorke.
3. The cold Newcastle Brown Ales chilling in the fridge.
4. Steak Tips on the grill after the mandatory marination in the Evil Speakers special sauce.
5. The Shuffle feature on my Nomad. I never used this till recently, but now I can't stop. 4000 of my favorites played at the will. From GBV to Big Star to The Pogues it all sounds good to these ears.
6. Ice Coffee now I'm not a coffee guy but there's something about Dunkin Donuts Ice Coffee. The Coffee nazi's will shun me for that one. To hell with them!
7. Magnet Magazine- Just a great publication. Pick up the new issue with Stuart Murdoch from Belle and Sebastian. It's choc full of indie rock goodness.
8. KEXP- After an 8 year run working on the air in comercial radio I soured on todays sad excuse for rock programming. Until I discovered kexp.org the greatest radio station on earth. Check it out.
9. My DVR/Tivo that stores all of my late night performances from bands I like but just can't stay awake for. As well as the latest episodes of Entourage.
10.Bacon. Give it to me with my eggs or slap it on my burger it doesn't matter. Just give me bacon. mmmmm Bacon (Homer Simpson voice)
Posted by Bryan Hamill - Executive Editor at 12:12:00 PM 1 comments 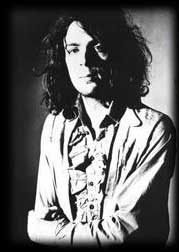 Syd Barrett dies at the age of 60

This might be old news for some but I couldn't let this go without at least a mention.